School Asks for 50 More Fathers for Event, 600 Show Up

In South Dallas, after Dade Middle School put a call out for volunteers to help with an event called “Breakfast with Dads”, they got more than they expected the next day. Initially, the school asked for at least 50 more dads to show up at the event. But then the next day, more than 600 fathers volunteered to help out. 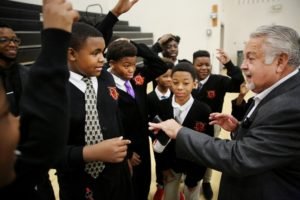 “We were asked to help get some extra guys to stand in as surrogate fathers and mentors for the kids whose dad’s couldn’t make it or don’t have a dad in their life,” said Donald Parish, the Dade SBDM Board President. The request was made out on Facebook for an additional 50 more men to show up at the event. Then the next morning, there were 600 dads waiting to help out at the school. The volunteer fathers came from diverse backgrounds, coming from all over Dallas. There were dads in local law enforcement, public officials, and community organizers. 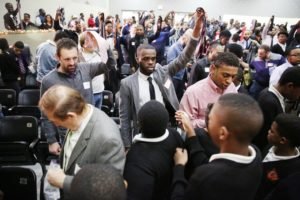 Each dad volunteered in their own special way. Some taught children how to tie a necktie. There was an auctioneer who showed kids how to run an auction. Several others just talked to the kids and gave them advice and guidance. With the success of the event, the school is planning more of these for the local community.

“Words cannot describe the impact mentoring youth can have on both you and your mentee,” Jason Rodriguez said. “Powerful to see a community of fellow men and fathers come together to wrap their arms around our young men. Thank you for having me out.”