Fashion trends are often birthed by viral social media posts. There have been several this year alone. As the holidays approach a new trend has been circulating in the social media site Instagram. Usually wearing scarlet red lipstick or green and red makeup is enough to show you’re into the Yuletide season, but now things are taken to an entirely different level. They are called Santa hat eyebrows. It’s a unique way of shaping and drawing your eyebrows to resemble a Santa Clause hat. 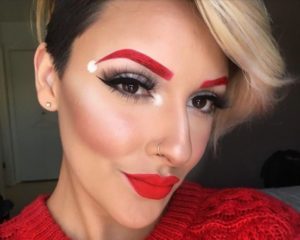 So far, there have been several trends including Christmas tree eyebrows, bauble brows, and even Rudolph the red-nose reindeer eyebrows. But this Santa hat design seems to have gotten the trending nod. This new look is all about turning your eyebrows into Santa Clause hat arches. The signature hat of Kris Kringel is shaped like a cone with a fluffy white ball the end. 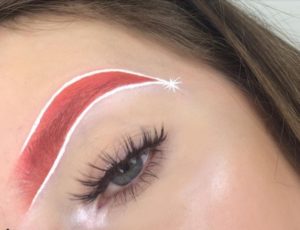 There is more than one way to join the Santa hat eyebrows craze. The first way is to color your eyebrows red and then draw a while ball at the end of the eyebrow tail to make it look like a Santa Clause hat. Most beauty bloggers prefer this. The other way is to paint a miniature hat halfway through one of your eyebrows. This is the preferred version for those that don’t have the make-up talent and skills needed to create red Santa hat eyebrows. This is also a great way to join in the trend without actually having to paint your eyebrows bright red. 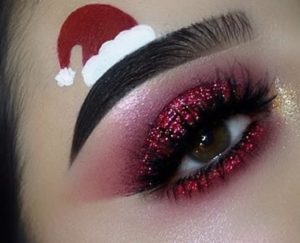