In Switzerland the world’s longest pedestrian suspension bridge opened earlier this week. The thin bridge spans a third of a mile or more than 1,620 feet or 540 yards. The bridge is also 28 stories above ground in some parts. The bridge officially opened after construction ended in Randa, Switzerland. The bridge is found on the Europaweg that connects the villages of Graechen and Zermatt. It is the longest pedestrian suspension bridge, meaning it can only be crossed by walking across it. 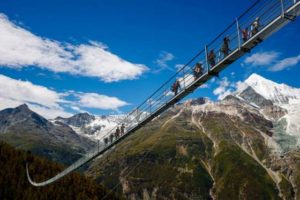 The officials at the south of Switzerland unveiled the bridge after it took a little over 10 weeks of construction. The bridge provides a way to cross the Grabengufer ravine. Aside from being the longest suspension bridge, it is also among the narrowest. The span of the bridge is just 25.6 inches wide, just enough for a person to stand in. The new bridge was made to replace the previous bridge that was damaged by rock falls last year. 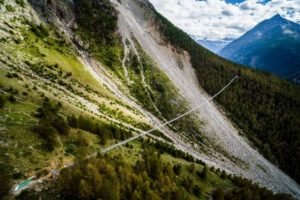 The bridge is mostly made up of steel and connects the trail that leads from Graechen and Zermatt. The trail is a popular 2-day hike in the Swiss Alps. The local tourism authority has also warned the public that the high bridge is not for hikers with a fear for heights. The bridge also completes a section of the Europaweg trail, which is a high-altitude hiking route that offers among the most spectacular views of Switzerland’s mountains, including the famous Matterhorn. The bridge was named the Charles Kuonen Bridge after its chief sponsor, a local psychologist and owner of a winery.