In Jordan, Prince William recreated one of Kate Middleton’s childhood family photos. Prince William was there to visit the Middle East and when he saw that he would be in the same spot as a photo from Kate’s childhood, he jumped at the chance. The story and the photos have since spread on social media and have gone viral, with a lot of people praising Prince William for his sweet gesture. 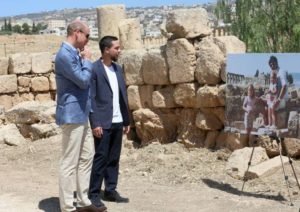 The photo is a Middleton family picture that includes a 4-year old Kate posing with her family in Jerash, Jordan. Also in the photo is Kate’s younger sister Pippa. They were in the Ruins of the Roman City of Jerash in the 1980’s. The photograph was displayed during Prince William’s tour to the site. Jordan is just one of the stops on Prince William’s royal tour of the Middle East. Kate herself could not attend the tour because she was at home with newborn baby Prince Louis. 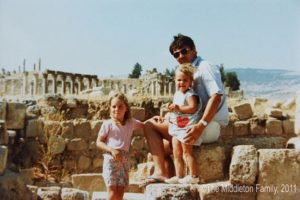 Prince William decided to take a picture in the same spot as Kate and her family and posed for a photo along with the family picture from the 1980’s. Kensington Palace tweeted a side by side moment of the two photographs and the post has since gone viral. The tour of Prince William started in June 24 and he has scheduled stops in Jordan, Israel, and the Occupied Palestinian Territories over the next week.

Prince William and Kate Middleton have been married since 2011. They currently have three children together, Prince George, Princess Charlotte, and the newborn baby Prince Louis.