Jackson Arneson was born with a chronic kidney condition. He had grown healthy enough to the age of 8, but his family knew that he had to eventually find a kidney donor. Then last December, after a routine kidney check up appointment, doctors told his parents that his kidney function was decreasing and they were going to put him on the deceased donor list for a kidney transplant. The list is a very long list with a lot of people in dire need of an organ, so Jackson possibly had to wait a long time before even the possibility of a deceased donor. 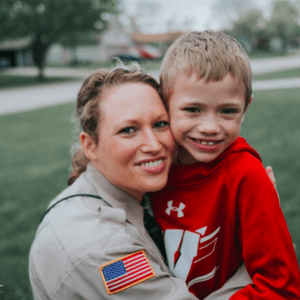 That’s when Jackson mom, Kristi Goll took her plea to Facebook and told the story of Jackson’s condition. It was then that Officer Bittorf read the post and immediately went in for a blood test. When she found out she was a match for Jackson, she immediately contacted Goll and her family and informed them that she was willing to donate her kidney for little Jackson.

Goll posted on Facebook: “After months of searching for a kidney donor for Jackson, I can say, ‘the search is over!!’ I can’t even put into words how amazing of a gift we are receiving from this amazing person. She surprised us after work today and I still feel in shock. Jackson is so excited and says, ‘I think my new kidney will make me run faster!’ Today you became our hero,” According to the doctors, a live donor was an even better solution as it is a more viable kidney for the young Jackson.