Dog Celebrates His Last Beach Vacation With a Special Gift

Cocoa, a 16-year-old Chesapeake Bay Retriever, enjoyed her final moments at her favorite vacation spot with her family at Virginia Beach. Her owners, Tom Antonio and his wife, had taken Cocoa to the coast for years, but her health started to fail in her later years, making the trip difficult for the family of three. So, Antonio decided to create a mobile bed for Cocoa to enjoy one last trip to the shore. "My wife and I, we came up with a way, with a mechanics creeper and stuff like that, to take her for walks. We had rope and a bed, and we'd bring her out," Antonio said. While out on a walk with Cocoa, a woman stopped the couple and asked if they wanted their photo taken. Antonio isn't on Facebook, so he had no idea that the picture of Cocoa in her bed had actually gone viral. "I found out from my brother-in-law. He said, 'Is this you?' and then other people asked, 'Is this you?' and I'm like yeah, that's Cocoa. That's Cocoa and I going for a walk," he said. 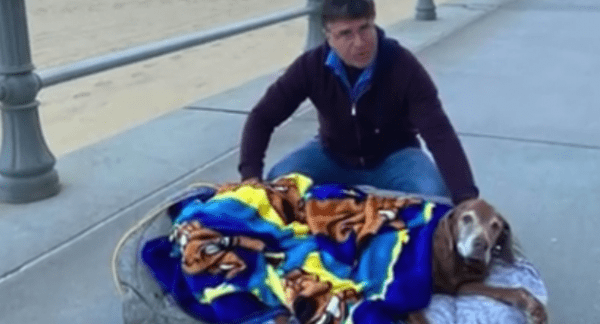 "It hit a chord with people that the bond we have with our dogs and our pets," he said. "It's strong." That was Cocoa's last trip to the beach, and she died only a few months ago. Antonio and his wife's bond with her will last forever, because when people are so attached to their pets, that love doesn't go away.