Parenting can be tough, especially when it comes to students just coming into puberty. You want to be there for them but you also want to give them their own space. But these parents from Arlington, Texas found the perfect way to encourage the students in their school without actually crowding them. They did it by surprising them by painting a few positive messages on the school bathrooms. 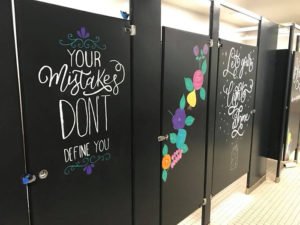 Eight parents including six mothers and two dads worked for 37 hours over the weekend to make renovations to the bathrooms at the Mary Moore Elementary School in Arlington. The parent wanted to surprise the kids by remodeling the bathrooms. But aside from remodeling, they also did a little bit of art and painting and left positive messages for the kids.

The parents cleaned and painted two bathrooms in the 5th grade wing. Aside from positive messages, the parents also added pictures and inspirational quotes to remind the children to be kind and that “they can do anything they want to do if they try hard enough.” It’s a message that the school, including its principal, Tyson Jones, has been telling his students at the school. 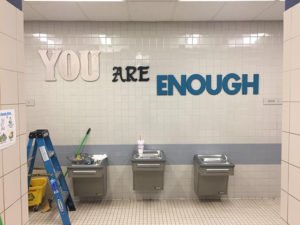 According to the school, none of the students had any idea that the remodeling was happening, and they were shocked to see the new clean bathroom with all the messages and pictures painted on the walls and stalls. According to Principal Jones, the students have had a positive reaction to all the messages that were left for them by the caring parents.