Paramedics are medical personnel that are trained to handle emergencies and medical crises. Their specific and intense training includes going into rough and dangerous situations to rescue people who are an inch away from dying and getting them stable enough to get to a hospital. But for this paramedic team in Waco, Texas, they went above and beyond their duty to help out an elderly woman, who had been mowing the lawn in a hot day. 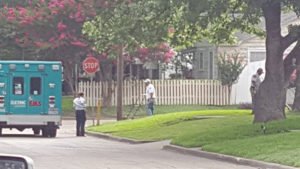 The crew of paramedics was making their rounds when they suddenly stopped by the road becauseÂ they noticed an old lady mowing her lawn. It had been a hot day, and with the sun out, the temperatures in Texas could reach dangerous levels. So the paramedic crew, who were in between calls, decided to stop and help out the elderly woman. According to a neighbor, the elderly woman was Margaret Durham, a 98-year old retiree, and she regularly tries to maintain her lawn by mowing it on a regular basis. 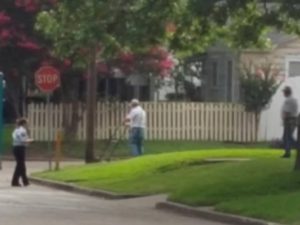 “She’s elderly and looked exhausted, she was in a dangerous slope of the yard, possibly could fall and lose control of the lawn mower and injure herself â€“ the need for us to intervene was there,” said one of the paramedics on the scene. The entire situation was captured by another one of Durham’s neighbors, and has since gone viral. The neighbor, Dashlin James, was able to take pictures from his phone while he was outside working on his car. Since then, the paramedic crew has received praise and encouragement on social media.