Olympics for Seniors Debuts in Brussels

In Brussels, the first ever Olympics for Seniors debuted with events such as the wheelchair race and the pancake toss. These Olympic-style sporting events are for Senior citizens, and it is open to locals with ages between 70 and 96. These ‘athletes’ get to compete in all kinds of adapted sports and events at the city’s very own national stadium. While there are indeed winners of each event, there are no losers from those that participated in this inaugural sports event. 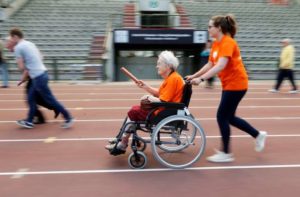 More than 130 senior residents of private rest homes participated in a variety of activities. Among the events that were held also included tossing a pancake, tossing a wool ball, a musical quiz, a wheelchair race, and a wheelchair relay in 25 meters in four turns. There are no restrictions on what these senior citizens can join and how many events they can compete in. The important thing here is that everyone has fun. These were actually the same principles that the original Olympic Games were based on. 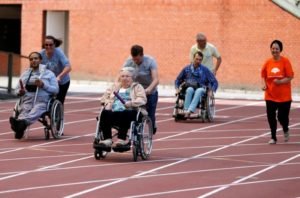 The city of Brussels and a travel organization working with rest home residences called “A Travers les Arts” are responsible for launching the inaugural sporting event. They launched the Olympics for Seniors to promote outdoor activities and exercise for elderly people. Â It was also a way to make the capital city of Belgium more “age-friendly”. Organizers of the event has called it a success, and that it could very well be the start of an annual event that they could launch in the city every year.