Oldest Albatross Becomes A Mother at the Age of 67

Each year, the limit for how old a woman can be a mother is being pushed, with moms in well into their 50’s and 60’s. The same seems to be happening with birds. Earlier this week, a Laysan albatross named Wisdom just became a mother despite being the ripe old age of 67. The new mother has just laid an egg and hatched a new chick with her mate named Akeakami. The mother is known as the oldest breeding bird in the world. 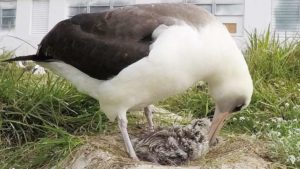 According to the US Fish and Wildlife Service, the bird is estimated to have laid her egg in December of last year. And earlier this month, the egg hatched and the albatross welcomed her newest chick. Â The two month incubation period is typical for this species of albatross. For the next two months, Wisdom will be taking care of chick before it will be strong enough to leave the nest.

Researchers have estimated that Wisdom was hatched in the 1950’s and she has laid an egg every year since she was tracked in 2006. Albatrosses are known as monogamous birds, but because of Wisdom’s age, many researchers believe that she has learned to have several mates in her lifetime. Wisdom is just one of the millions of albatrosses that fly thousands of miles to return to the Midway Atoll in the middle of the Pacific Ocean to nest. But Wisdom also has the distinction as being the oldest albatross in the wild. 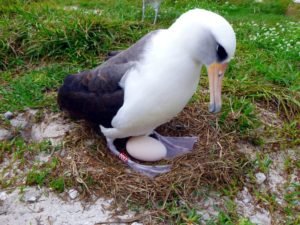 The Midway Atoll is the largest albatross colony in the world with more than 600,000 breeding pairs during breeding season. It is located 1,500 miles from the islands of Hawaii.