The Netherlands is a country that has several bike lanes because of the percentage of the population that use bikes for their daily commute. But there is only one bike lane in the entire country made from recycled tissue paper. In the northwest province of Friesland, a half a mile of bike path that connects two towns is paved with recycled toilet paper.

Toilet paper helps with traction on the road when it gets wet. The toilet paper is used to add cellulose to the asphalt. This is especially important in the roads of the Netherlands because of the floods that occur there. The cellulose also helps in stabilizing the mixture that makes up the asphalt. While there are a lot of materials that contain cellulose, using recycled tissue paper is ideal because most people are hesitant to use it for anything else. 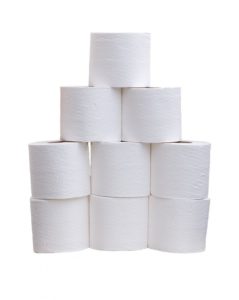 The toilet paper is collected during waste water processing. It is separated from excrement and sterilized and then bleached and dried for reuse. Even with such a process, no one wants to come into contact with the same material they already flushed down the toilet, no matter how sterilized it is. So the high quality cellulose fibers are now being used to pave roads instead. The process of making asphalt includes high temperatures which would kill any remaining germs and pathogens from the tissue paper. The bike path in Friesland has been installed for about a year, and it looks just like any other bike path in the country. No one would even know that the road was made from recycled tissue paper.