In Alabama, one hilarious mom posted a funny picture of herself relaxing as her kids are in the background about to go to school. Jenna Willingham planned the funny photo shoot that has her smiling and relaxing in the family pool with a drink in her hand as her kids look forlorn in the background as they get ready to go to school. The picture has spread through social media and quickly became viral. 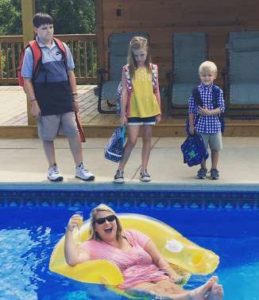 In the photo, we see Willingham lounging in the pool chair with sunglasses, toasting her drink to the camera. The children look dejected as they get ready to go to school in the background. But according to Willingham, her three kids, 11-year old Wrangler, 7-year old Emmy, and 4-year old Sykes are all in on the photograph. But that doesn’t mean that her celebration is staged. According to the mom, the three kids have been a lot to handle during the summer and she will truly relish the hours of quiet time at home. 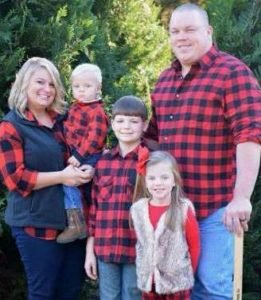 “I told them I made a countdown on my phone for the first day of school and I was going to have a pool day because they have been arguing with each other all summer,” said Willingham “They fight over the TV, and video games, IPad and chargers.” The children all thought it was funny and knew that it was all a joke. The photo was taken on a Sunday, but they were actually going to school the next day on the first day of class. Despite her jovial facial expression, Willingham says she was also sad, especially for her youngest child, Sykes, who will be attending her first year at school.