Mom Crocheted an ET Costume For Her Son

Stephanie Pokorny is a mother of four boys and a very talented crochet maker. She has always loved making things with her hands and she has a talent for crocheting. In the past few years she has been able to meld her passion for crocheting and her passion for Halloween. This resulted in amazing crocheted costumes that she was able to make for her sons. Her latest creation is a lifelike ET costume with amazing details. 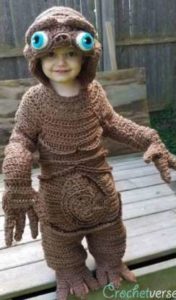 “I have always been someone who liked to make things, so instead of the toy store, my grandma and grandpa would take me to the craft store instead,” Stephanie said in an interview, “My grandma taught me at 16, and I became obsessed. The rest is history! I have always been a real Halloween-lover, so it was natural to combine the two loves.” Pokorny also says that she lets her boys decide what to crochet for their costumes.

“Each year, my children choose what they want to be, and I do my best to make it come to life for them,” explained Stephanie. It takes a long time to create each costume and she has to be told several weeks before Halloween to create the best costume for her kids. 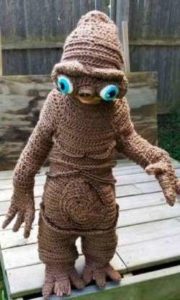 “The costumes are freehanded with no pattern, and that’s actually my favorite way to work,” said Pokorny. Aside from the ET costume, Stephanie has also created a Dracula costume and the Predator costume in previous years. “I’m guessing the Predator costume I did most recently took about 40 hours over a period of three weeks.”