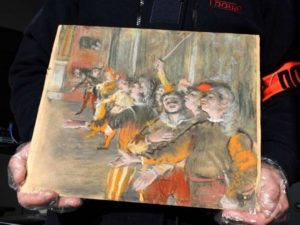 The painting was discovered inside of a suitcase in a luggage compartment of a bus after police started to carry out random security checks at a highway rest area around 20 miles east of Paris, France. None of the passengers that were on the bus claimed to own the painting. The authenticity of the art work was later confirmed by the Orsay museum. Investigators are still looking into how the painting got in the bus and who was carrying it. It is possible that it was being moved to another country to be smuggled to a buyer.

The pastel painting is said to be worth approximately 800,000 Euros or £700,000. Francoise Nyssen, the culture minister of France, said that she was happy to recover a work of art “whose disappearance represented a heavy loss for the French impressionist heritage”. Edgar Degas is known for his painting and sculptures of dancers. Degas was born in Paris in 1834 and is known as one of the most important founders of Impressionism. This art movement is known for its small and thin brush strikes used to depict visual impression of color and light.