Millennials and Generation Z Share Their Hilarious Differences In Growing Up

As Generation Z slowly grows up, we’re starting to hear more and more about them. Especially now that they are entering the age of joining social media, things are starting to getÂ really obvious about how different they are from Millennials. And, it’s hilarious.

For Millennials, that’s pretty triggering. The fact that 2000s babies are out and about, going to concerts… That’s pretty telling.

There’s so much lingo that is still used today but totally lost on Generation Z, such as “tape” while recording something or “hanging up” the phone. Well, we don’t use videotapes, and no one uses landlines anymore so… Yeah, you’re all old. 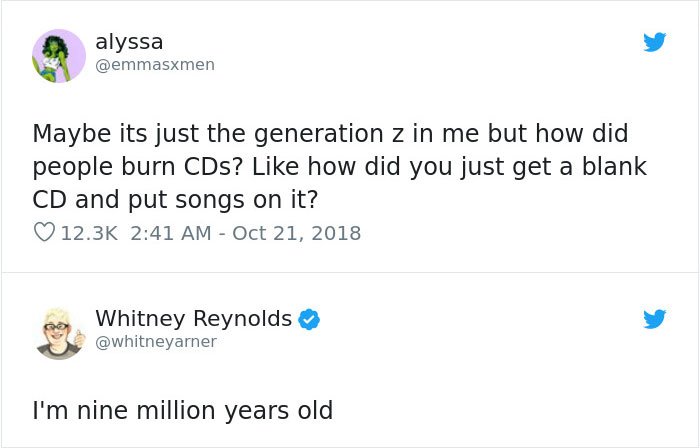 For Millennials, burning CD’s was one of the most exciting things you could do. Now, kids have no idea what it means. They don’t even know what a bank CD is. What is happening?

As time goes on, the differences between young adults and teenagers will get even more terrifying. The only thing you can do is just… ignore it. Ignore the fact that you’re aging and you’ll be fine!