Medieval Trials Were More Barbaric Than You Probably Thought

It was 800 years before England had a predetermined jury system. A man named Aliward forced the lock on his neighbor's door and entered illegally. He claimed he was there to collect a debt he was owed, but he was arrested for trespassing and brought in front of a court. The court determined that if he floated when cast into a pond, he would be guilty in the eyes of God. If he sank, he was innocent of wrongdoing. He floated. Because of this, his eyes were gouged out and his genitals were mutilated as punishment. 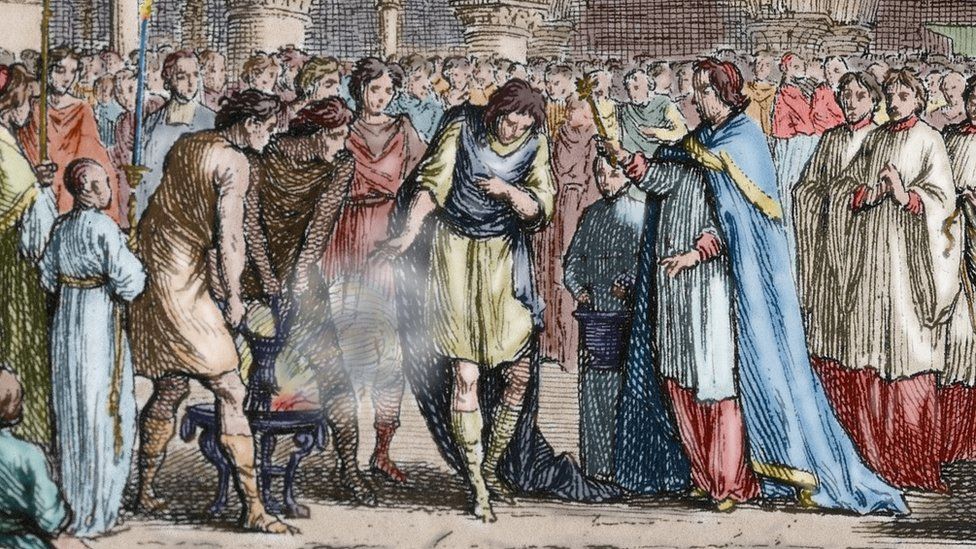 It's easy to write these trials off as brainless and barbaric, but a study done by the University of St Andrew's School of History proved that there was a certain degree of nuance to each of these punishments and results.

They highlighted that there were two primary forms of civilian trials. There was trial by way of fire, and trial by way of water. Depending on the severity of the crimes committed, individuals would be assigned to either branch of trial style. Typically, trial by fire would be a violent crime or crime of passion, while those who were assigned trial by water had committed more selfish crimes.

The standard procedure for a trial by water was to bind the accused's hands and feet together and dip them into cold water. The trial conductors would tie a knot at the end of the rope that the accused was connected to. This knot would be roughly 1-2 feet above where the accused's limbs ended. If the individual in question sank up to the knot in the water, they would be proven innocent. However, if the individual floated in the water, and the knot did not become submerged, that individual would be considered guilty. With a trial by fire, the individual would be handed a red hot iron rod and told to hold it in both hands while walking forward roughly 3 meters (9 feet). Then, the accused would be thrown in a jail cell and monitored for the next three days. If the individual's wounds started to heal normally, they would be considered innocent. If the wound festered with infection, they would be considered guilty. Their punishment would be to succumb to infection in the jail cell with no water provided to ease their fever.

Another method of judgment was trial by combat. This was outlawed in 1819, but before that happened, this gave the accuser the opportunity to fight their accused to death using whatever weapon the accuser chose. In some cases, the accused were criminals who had a background in combat, which is why this method of trial was mostly barred to civilians. Those who served in the royal army were usually open to this kind of opportunity, but it was mostly to defend the honor of the household that had been affected by the crimes.

Needless to say, these methods of trial are now outdated. Even back then some of these actions were considered outdated. So, in 1219, King Henry III issued a standardized juried trial that would replace all trials in the eyes of God. That way, the accused would have a fighting chance to prove themselves innocent, in addition to no longer petitioning God for constant judgments and pardons.