This month, a lot of men are starting to participate in the No-Shave-November competition with their friends. But they will have a hard time competing with Ram Singh who has facial hair that is measured at 18 and a half feet. Singh is currently the owner of the world record for the longest mustache. Singh has been growing his hair out since 1970. 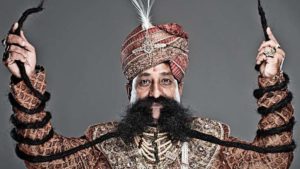 The 62-year old Singh is a resident of Jaipur, India. He has always been known for his long facial hair, but has only recently been awarded as the world record holder for the longest mustache. He has been growing his hair since 1970, but was recognized for the record in 2010. He has not been beaten since then. Singh explains that he spends around two and a half hours every day just grooming his beard, but he only washes his mustache once every two weeks. 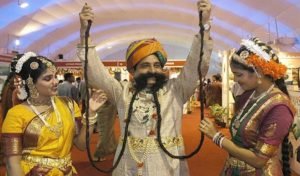 “People always compliment my mustache,” Singh said in an interview, “Both mustache and beard have always been a symbol of pride for men, so I’ve been able to earn a name, fame and respect for my mustache.” Ever since getting the record, Singh has been recognized by several significant people in India, including several politicians and even the President of India.

“I use various herbal oils to help maintain the health of my mustache. I massage my beard with a concoction of olive, mustard and coconut oil,” Singh explained. “Once I have done the mustache, I wash my beard with water infused with fuller’s earth (clay material) that I keep overnight.”