Eric Martinez was with his girlfriend Cammy Rynae Cuoco in June for a vacation at Riveira Maya in Mexico. During their stay there, they were at an underwater photo shoot. Cuoco has been obsessed with mermaids all her life, and she was modeling as one in a photo shoot. That’s when Martinez took the opportunity to make the most of the situation. Martinez got in the water and proposed to Cuoco while she was doing something that she really loved. 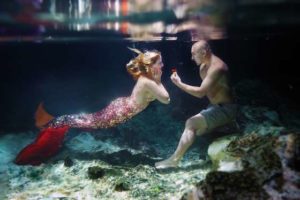 “How many girls get to say that their man cares that much about them, to go such depths to make her dreams come true?” said Cuoco. But aside from the perfect time and place, Martinez also wanted to have the perfect ring. He wanted not just any ring that would stand out for Cuoco, but also for the camera. He was proposing in the middle of photo shoot after all. So after discussing it with the photographer, they decided to use a ring that would stand out underwater, so they used a bright red lollipop candy ring. 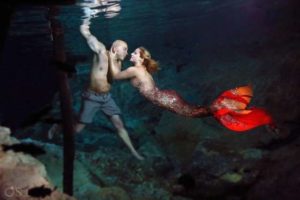 “My favorite princess was always Ariel from ‘The Little Mermaid,’” Cammy told HuffPost. “Mermaids are magical and get to explore the vast depths of the sea. (And) how perfect, that I get to have a Prince Eric of my very own.” Aside from having the perfect place and get up for the proposal, they also got to record the momentous occasion, thanks to the photographer that just happened to be there. But Cuoco says that even though the photos look effortless, it was actually difficult to pose on water or under water.