Sam Barsky has a very unique hobby. Not only does he knit sweaters, but he knits images of famous places into them. Eventually he decided to visit these places and wear the sweaters and shirts at the same time. He started this hobby 19 years ago. Eventually he realized that these were actually great opportunities for some interesting and funny photographs. 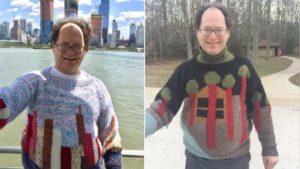 “We are going to all these places â€” it just felt natural,” Barsky said. “If I was going somewhere and I had a sweater of it, wear the sweater there. I noticed after a while I had a collection of pictures wearing my sweaters in the places they represented and I thought wow this is another type of art.”

Barsky then started an Instagram account so he could share the pictures with everyone on the internet. He has gotten a lot of appreciation and so far, he already has close to 30,000 followers. His adventures have taken him to places such as deserts in Mexico and spending time with llamas in Maryland. Barsky has already knitted 120 sweaters in total. It takes him a little over a month to knit a complete sweater. 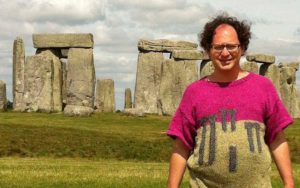 Although Barsky has not been to every place that is portrayed in his sweaters, he has learned to improvise. Although he has a sweater of the Eiffel Tower, he has never been to France. But he was able to take a trip to Nevada where he was able to pose next to a replica of the Eiffel Tower in a place called Paris at the Las Vegas Strip. Barsky is already working on some Colorado-themed sweaters for when he will be going there next summer.