When Stu Williamson turned 100 years old, he knew he wanted to do something special to mark the occasion. He said that it was his life’s mission to do something incredible with each milestone age. And for hitting the triple digits, Williamson decided that he would mark the occasion by going skydiving. Not only would be it a great birthday gift. But he would also be breaking the world record for the one of oldest to parachute jump. 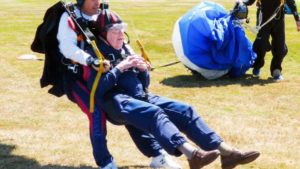 But even at such an advanced age, he doesn’t hold the number one spot for the record of the oldest skydive. That distinction belongs to Bryson William Verdun Hayes of Devon, England. Hayes performed a tandem skydive last year at the age of 101 years and 38 days old.Â  Guinness World Records was on hand to witness the jump. But Williamson is determined to break the records, especially after doing it first hand and enjoying the experience.

“If I live another year] and two months, I’ll bump him out of his place,” Williamson said. “I’ll have a reason to live.” Williamson lives at a retirement community in Horizon House. “It’s never been an overwhelming desire of mine to jump out of an airplane, but I have always liked roller coaster rides and risk type things, and I just thought, well, I’d like to do it,” he explained. “I wouldn’t call it fun, but it’s a sensation I would never experience anywhere else.” 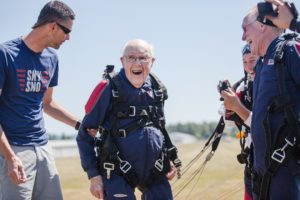 “The experience is somewhat similar to being in a hurricane, except there isn’t a palm tree to hold on to,” Williamson joked. “You’re just in the air, totally vulnerable. You can see the mountains and both sides over here; we have the Rockies on one side and Mount Olympus on the other. It was a gorgeous day, and it was thrilling.”