Justin Trudeau has been one of the more popular leaders in today’s political world. Not only are his views popular with a majority of the population, but he is physically fit, good looking, and the owner of a full set of hair. The fairy tale life of this politician does not end there. As we got to find out recently, he is also the father of an adorable little boy named Hadrien. 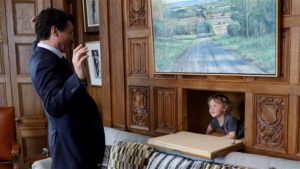 Hadrien is the youngest child of Justin Trudeau. He was taken to work by the Prime Minister where he got to know more about dada and what he does all day when he’s away from home. The photos of the father and son spending some quality time at the Parliament has since gone viral, with adorable shots of the pair playing a game of hide and seek in the office, and racing down the corridors of the building. Little Hadrien was also unfazed when he accompanied his father, as Trudeau answered some questions by the media at a news conference. 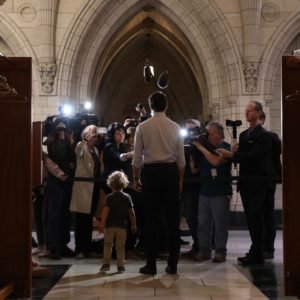 The 45-year old prime minister of Canada has three children with his wife of 12 years, Sophie. They include 10-year old Xavier James and 8-year old Ella-Grace. The 3-year old Hadrien has been known to steal the spotlight, especially when all the Trudeaus are together. He was already charming the public as a toddler and has been known to talk to reporters and give them high-fives. Justin Trudeau is the 23rd Prime Minister of Canada and the second youngest to hold the post.