A man in Japan recently made the news because of his recent wedding. That was because the man got married to a hologram of a virtual reality singer. The man by the name of Akihiko Kondo exchanged vows with an animated character by the name of Hatsune Miku. Being that Miku was an anime or an animated character, she had to be projected to be able to stand in the altar with Kondo. 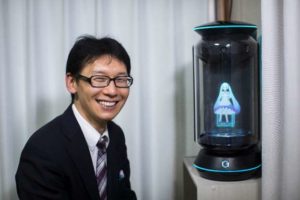 The 35-year old Kondo spent two million yen ($17,600) on a formal ceremony at a Tokyo hall. He also had 40 guests that bore witness to his union with Miku. She was also present in the reception in form of a small doll. One of the people that was missing from the wedding was Kondo’s mother because she refused to participate in the ceremony.

“I never cheated on her, I’ve always been in love with Miku-san,” said Kondo, “I’ve been thinking about her every day,” Since March, Kondo has been living with a talking and moving hologram of Miku. The hologram is projected in a $2,800 desktop device. The wedding ceremony has no legal standing, but that didn’t stop Kondo from getting the doll an official wedding ring. 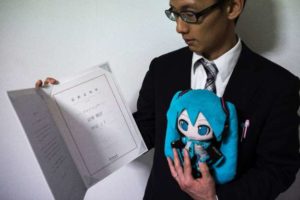 “I’m in love with the whole concept of Hatsune Miku but I got married to the Miku of my house,” said Kondo. Kondo considers his marriage to be ordinary. Each morning his wife wakes him up and sends him to work as an administrator at school. At the end of the day, he calls her by cell phone that he is on his way home, and she turns on the light. At night, he sleeps alongside the doll version of Miku from the wedding.

“There must be some people who can’t come forward and say they want to hold a wedding. I want to give them a supportive push,” he says.