The snow monkeys of Japan are known for their preference to stay in the hot springs in the Nagano region of the country. Despite their fur that allows them to survive in the cold temperatures, they love to spend time in the warm waters. They love the springs so much, that the location has become a tourist attraction for tourists that want to take pictures of the bathing macaques in the springs. 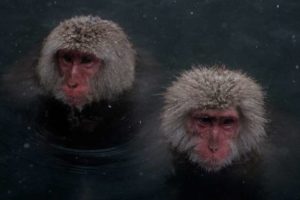 Researchers in Japan have now found out that relaxing in a hot spa is not something limited to only humans. They found that the snow monkeys also benefit from the steam and hot water. It was assumed that the monkeys in the hot springs were there only to warm up during the winter months, when snow covers pretty much everything in the Nagano region. 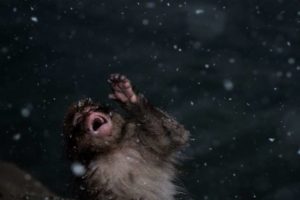 But research from the Primate Research institute in Kyoto University found that there was more to it. They studied 12 female Japanese macaques at the Jigokudani Yaen-Koen monkey park in Nagano. They studied the bathing behavior of the monkeys and analyzed their droppings. They found that the monkeys in the hot springs were less stressed because of the low levels of glucocorticoid, which is high when stress is also high. The research has also shown that the monkeys at the hot springs have better life longevity and fertility.

“The study showed that bathing in hot springs is beneficial not only for people but for Japanese macaques too,” said researcher Rafaela Sayuri Takeshita, “We also want to study the relationship between bathing and their reproduction and longevity in the future.”