John Delaney is a researcher at the National Gallery of Art in Washington. Recently, he has been performing a series of infrared image scans on the paintings of the art gallery. He was able to discover recently how one of the paintings by Pablo Picasso has another composition found underneath the work of art. The paintings were separated by a newspaper. 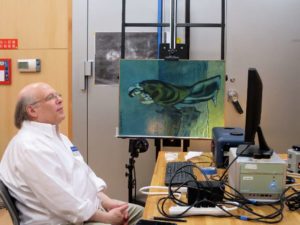 Infrared technology was able to help Delaney peel back the layers of a Picasso painting to reveal what lies underneath. The US and Japanese researchers scanned the painting entitled “Mother and Child by the Sea”, owned by the Pola Museum of Art in Hakone, Japan. They were able to reveal a page from a 1902 French newspaper named Le Journal, and even more amazingly, they were able to find another composition underneath the newspaper. 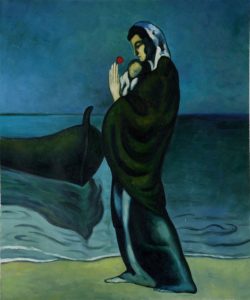 “While the reason for the presence of newsprint in the paint layers in a mystery, the discovery is significant for Picasso scholars due to the proximity of the date to the artist’s move from Paris to Barcelona,” said the National Gallery of Art. The scan was able to show clear images of another painting found underneath. The image was of a woman sitting down next to an absinthe glass with a spoon in it. Picasso was known to reuse canvasses and incorporate previous sketches into another painting.

“It may have been used to cover previous layers before he painted another layer or the final composition of the mother and child,” said the researchers of the layers in the painting.