A hungry bear that had apparently woken up from hibernation broke into a home in California to find some food. The bear was found tearing up a kitchen when it had gotten the scent of some food. The owners of a residence in Lake Tahoe were shocked when they found a bear in their kitchen, and they immediately called for help form the Placer County Sheriff’s Office for help. 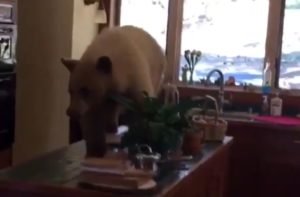 Thankfully, the sheriff’s department deputies were able to respond immediately and chase the bear out of the home. According to the report, the bear had eaten bread and a few pieces of fruit. When the officers had arrived, they took a video and pictures of the bear in the kitchen. The video was shared in social media, and it showed how the bear was not even concerned that there were people outside the window watching him trash the kitchen. 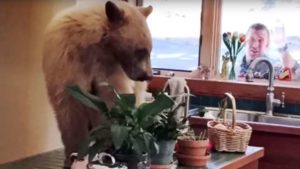 The situation was quickly handled when the officers scared the bear and chased it out of the house. But the Placer County Sheriff’s Office gave a warning to people who live near the woods to be cautious of animals especially during the springtime when most mammals, such as bears, come out of hibernation. These animals will be very hungry and will venture into populated areas for food.

“As bears are coming out of hibernation, please use utmost caution if you encounter them,” said a message with the video, “In this case, the homeowners were very grateful to the deputies who got the bear out of their house with no injuries and no property damage.”