Horse Rescued Out of A Ravine via Airlift

In California, a lucky horse was rescued and air lifted out of a ravine after it had tumbled into it along with its rider in an accident earlier this week. The rider was uninjured and was able to walk away, but the horse was not able to get out. The rider was reluctantly forced to leave her horse in the ditch overnight until she was to be notify the authorities for a rescue the next day. 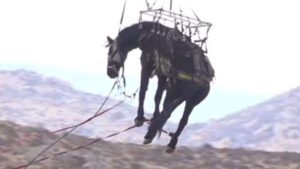 The operation was a joint rescue effort between several agencies in the area, including the San Bernardino County Fire and Rancho Cucamonga Fire Department and the Los Angeles County Fire Department. The next morning, the agencies got together and came up with a plan to get the horse to safety. Footage of the rescue was taken on the scene, which showed a very scared and confused horse being pulled up in the air just outside the San Bernardino National Forest. 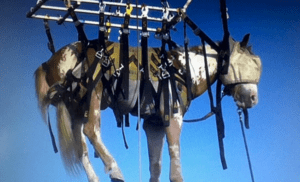 The horse was airlifted using a helicopter with straps securely fitted all over its body. To make sure that the large animal did not panic or move violently at the sight of being airborne, its face and its eyes were covered. The horse was lifted out of the ravine and was gently lowered back to the ground a few yards away. According to local officials, the horse is now being treated by a local vet for scrapes and bruises. The owner of the horse expressed her heartfelt gratitude at everyone that was involved in the daring rescue.