Kaitlin O’Connor is just any other high school senior in that she wanted to attend her school’s homecoming dance. She even had her best friend, Blake Mount, to go with her. But then her best friend suddenly fell ill with leukemia and couldn’t go. So O’Connor did what any best friend would do, and brought the homecoming party to her best friend in the hospital. 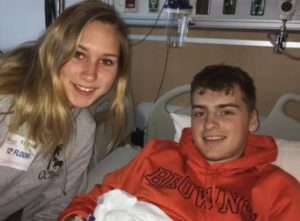 The Hillard Davidson High School in Ohio worked together with the hospital where Mount was staying so they could throw the homecoming party at the premises. O’Connor, other friends, and members of Mount’s family was also there. O’Connor explained that their families had been really close all their lives, and they were there for each other when Blake was diagnosed with leukemia and admitted to the hospital for chemotherapy.

“Homecoming is a big event in the town we’re in and for him to miss that in his senior year. We didn’t want that to happen,” O’Connor said. “Just to lift his spirits and show him his friends are still thinking of him. He was just super confused, he didn’t know what to think of it. He said, ‘Yeah, but I can’t go.’ He didn’t realize it was right down the hall!” O’Connor then handed him an outfit and led him down to a hall room, where his closest friends were waiting for him. 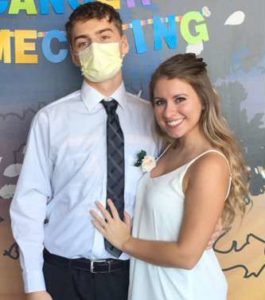 “He was very happy,” O’Connor said. “He’s one of those people who always has the tough guy face on, but he was smiling. You could tell he was really excited about it, especially when he walked in and all his closest friends were in there. It was just like a real homecoming, except we were in the hospital and not the school gym. The main thing was to make him happy and make him feel like he had some normalcy in his life for one night and just to make him feel like he’s not in the hospital.”