For over a week, ads for wedding planning company Zola were running on the Hallmark Channel. Then, the TV network pulled four out of six commercials that depicted lesbian couples, citing a vague rationale: "We are not allowed to accept creatives that are deemed controversial."

The decision was reportedly catalyzed by complaints from a conservative group that petitioned against the commercials, calling them a scourge upon Hallmark's "family-friendly" reputation. However, the blatantly homophobic move shocked LGBTQ+ advocates, who perceived it as a surprising step backward among the recent surge of progressive representation.

Zola announced they would no longer be advertising on the Hallmark Channel. After facing criticism on social media, a statement was released by Hallmark Cards CEO Mike Perry:

"The Crown Media team has been agonizing over this decision as we've seen the hurt it has unintentionally caused. Said simply, they believe this was the wrong decision. We are truly sorry for the hurt and disappointment this has caused."

William Shatner tweeted about the ordeal, saying, "Put the commercials back!" Ellen DeGeneres followed up and asked, "Isn't it almost 2020?" 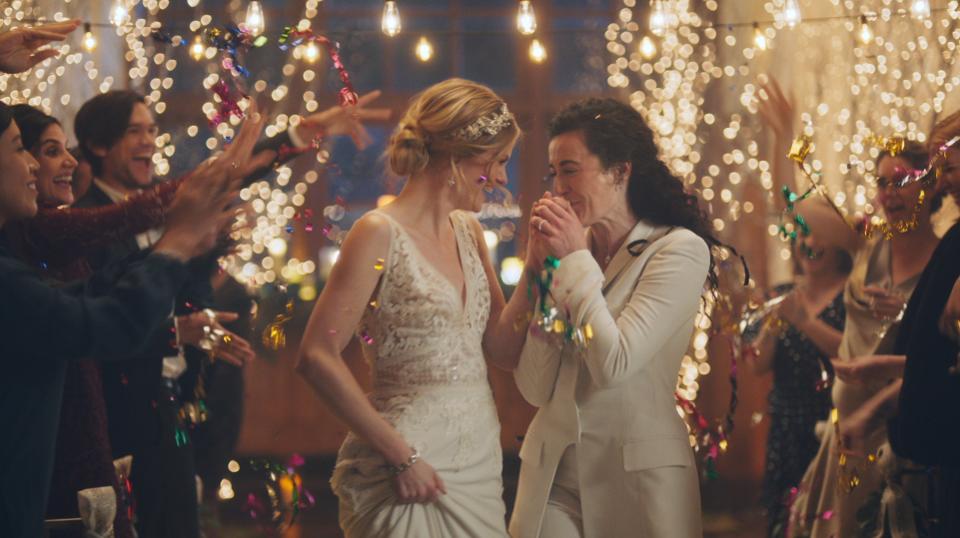 Although Hallmark claimed to have pulled the ads because the debate it sparked was "distracting from the purpose of [their] network" and said they were simply following their policy to avoid airing ads with "overt public displays of affection...regardless of the participants," Zola called their bluff. According to Zola, Hallmark showed an ad featuring a heterosexual couple kissing at the altar but rejected a spot with two brides kissing. Hallmark ads featuring same-sex couples have been aired since 2017.

By Sunday evening, the owner of the network backtracked and expressed apology for "the hurt and disappointment it has unintentionally caused." The ads will allegedly be reinstated and the Hallmark Channel will be re-partnering with Zola as well as hiring the help of a nonprofit to improve its LGBTQ+ representation.

"Across our brand, we will continue to look for ways to be more inclusive and celebrate our differences," Mike Perry said.