A grandmother in Ohio named Sherry Pratt wanted to do something special for her family and for their kids. She decided that she wanted to do something unique for movie night, which was usually hosted in her house. The idea first came to her when she was scrolling through Amazon and she stumbled upon video projectors. This gave her the idea of making her own drive-in theater on her own backyard. 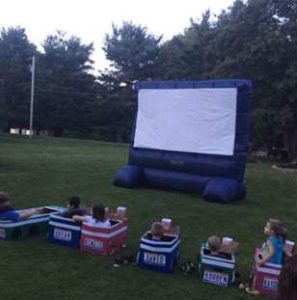 Pratt thought that having a special drive in theater would be special for all the kids in the family. First she created miniature cars out of cardboard boxes. Then with the help of her son, she also designed license plates with each of her grandchildren’s names on them. Then for the screen, she used a blowup balloon to hold up a sheet for the projector. After she had assembled everything, she then invited more children to join in on movie night. A little over 12 kids showed up for the special movie night. 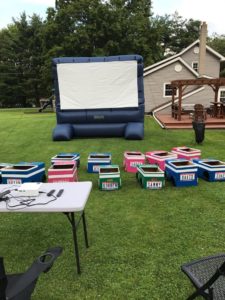 Aside from providing the car seats and the screen, Pratt would also provide the children with concessions for the full drive in movie experience. She would offer them candy, corn dogs, juice drinks, and of course, popcorn. She even provided each of them with portable trays to hold their food and drinks while they enjoyed the movie. One of Pratt’s nieces posted photos on social media and it quickly went viral with over 70,000 shares, with most comments saying it was one of the cutest things they’ve ever seen. For the inaugural showing at this miniature drive in movie theater, they showed the animated film Cars 2.