German Beats His Own Record for Carrying Beers

In Bavaria, a man is set to beat his own record of carrying several tankards of beers and then setting them down across a distance. The man, named Oliver Struempfel, will be attempting the feat this during Germany’s Oktoberfest, one of the largest beer festivals in the world. His goal was to carry 31 beers, stacked up in two levels between his arms, and bring them 40 meters before setting them down again. 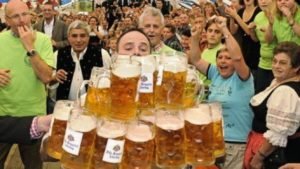 Beer stein carrying has been one of the many competitions set in the town of Bavaria during Okbotberfest. Carrying more than 5 tankards of beer is hard enough, but 20 or 30 seem almost impossible. And the bigger challenge here is that the tankards used in the competition are Oktoberfest steins, which are significantly bigger than your local pub pint. Struempfel’s go was to carry 31 tankards but two of them tipped over at the last moments. But his feat of 29 steins was still a world record. 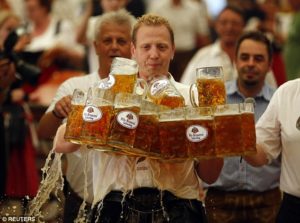 “I first did 27, because I wanted to be sure and then at the end I said, ‘Let’s add another one and get over 30’,” Struempfel said. “Unfortunately it didn’t quite work, but having managed to put 29 down. I think it’s amazing.” The 29 tankards of beer weighed a whopping 69 kilograms that he had to carry with only his arms. To prepare for the event, Struempfel said he trained at the gym at least three to four times a week since February.

“When I think about it, it’s 200 hours for about 40 seconds of walking,” he said after the feat. Struempfel held the previous record of 25 tankards of beer, which he set in Munich in 2014.