Aaron Jones is the running back for the Green Bay Packers. As a football player, he is used to pushing and shoving people who weigh upwards of 250 pounds. So it was a relatively easy task for Jones to push an elderly woman through the airport. Although it was physically not a challenge, it is admirable to see a professional athlete show some decency and generosity in assisting the woman he barely knows. 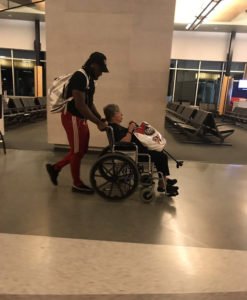 It was Monday when Aaron Jones was photographed pushing an elderly woman on her wheelchair through the Appleton International Airport in Wisconsin. The man that took the picture was also a traveler and a big Packers fan. That is how he recognized Jones as the running back of his favorite team. The 23-year old Jones is entering his second season with the Green Bay Packers. He had a stellar rookie year and people are looking forward to his sophomore season. 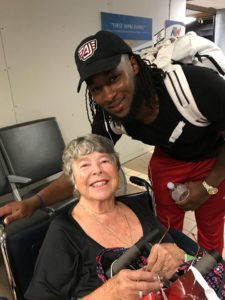 “Just watched Packers Aaron Jones push a random lady through the Appleton airport because there was nobody there to push. GO PACK GO!” said the woman on her social media page. The post has since gone viral, and several people have shared and liked the post. Several other people have praised Jones for his kindness.

“Another reason why I love being a Packers fan. His parents raised him right,” said another twitter user. Football players don’t really have a good reputation when they are in the news. But at least this running back has not his success or his wealth keep him from doing the right thing.