A British “food illusionist” by the name of Ben Churchill is making a name for himself by creating desserts that look like ordinary household items. Among his most popular creations is an orange parfait that looks like a moldy orange, an olive oil sponge cake that looks like a dirty kitchen sponge, and a vanilla Panna Cotta cake shaped like a full ashtray, complete with butts. 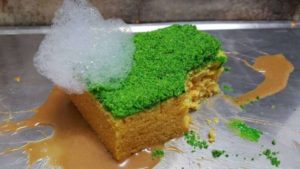 Churchill said that he got into the culinary world by accident. After he had dropped out of art school, he took a temporary job at a local pub as a cook, and got a taste for creating food. It wasn’t until 2015 that he started learning how to make desserts and pastries. He taught himself how to make simple pastries but eventually preferred creating his own desserts.

“I had never done pastry before and wanted to learn, so I just started teaching myself,” Churchill said in an interview, “I ventured into fruit-shaped desserts, but found them too limiting. I used inspiration from films, video games, the world around me, to start seeing what I could do with food.” 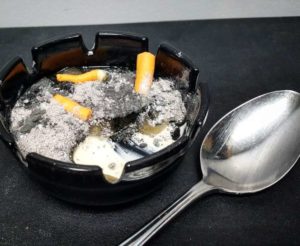 Among the most well known desserts of Churchill are also inspired by his favorite movies, TV shows, and even his favorite toys. He has created delicious desserts drawing inspiration from Star Wars, Game of Thrones, Harry Potter, and LEGO. He even published a book about his unique food creations called Food illusions.

“I’ve noticed people love the controversial ones like the sponge, so I decided to take this route with the ashtray,” Churchill says. “I love challenging perceptions, questioning good taste.”