Recently, a father did one of the most beautiful and heartwarming gestures when he joined his young daughter on stage to help with her stage fright. This happened during a ballet dance performance of a school in the City Hall of Hamilton, Bermuda. The class was about to perform its dance routine when one of the girls started crying from stage fright. So her dad came on to the stage to help her overcome her fear. He even started to do a few dance moves. 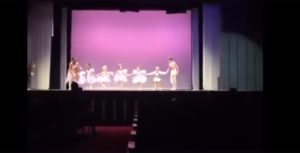 The actions of the father was captured on video by several of the audience members and posted on social media, where it quickly went viral. The little girl, named Bella entered the stage with 8 other girls and their dance instructor. But the Bella got confused after seeing the large crowd in the audience and she started to mess up her steps. Her father was cheering from the side of the stage and saw her crying and jumped into the stage and comforted his daughter despite carrying another baby in his arms.

Bella can be seen looking at her father as he tries to encourage her by doing a few ballet moves himself. The little girl slowly gains confidence and started to dance on her own, to the delight of the audience who can be heard cheering and applauding the performance of the baby (and maybe also for the heroics of the father). The video has been shared more than 30,000 times and has over 23,000 reactions.

“Not many children have had such a privilege, great dad,” said one Facebook User in the comments.