Father Asks Celebrities to Tweet His Bullied Son on his Birthday

Earlier this week, a father from Leeds, England turned to twitter to finds something special for his son Ollie and his upcoming 9th birthday. According to online reports, Ollie was being bullied, and his father made a request on twitter for celebrities to send the youngster encouraging and positive messages for his upcoming birthday. The tweet soon became viral and several celebrities from all over the world tweeted to greet the young Ollie. The tweet request read: “Strange request. Anyone know anyone famous/well known who could send Ollie a positive/9th birthday message.” 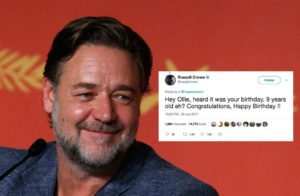 Among the most notable celebrities to greet Ollie includes actors Russell Crowe, Pearl Mackie, and several other British actors. Ollie was also able to get greetings from singer Dione Warwick, anti-cyberbullying front person Monica Lewinsky, and astronauts Tim Peake and Chris Hadfield. Ollie was also greetedÂ by fictional characters, most notably Bart Simpson of The Simpsons (thanks to Eric Keyes, a character designer from the show). 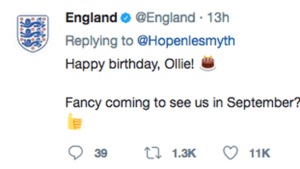 Aside from these personalities, Ollie was also greeted by teams and establishments. The Toronto Raptors of the NBA sent a greeting, as well as several United Kingdom soccer clubs. He was also greeted by the official twitter accounts of Westminster Abbey, Wales Comic Con, and England. Because of the overwhelming response to the request, Ollie’s mother, Natalie Hope-Smith, used her husband’s twitter account to thank everyone who made an effort to make Ollie’s day a special one.

“I am completely overwhelmed by everyone’s kind thoughts,” said Hope-Smith, “You do not know what this means to me and will to Ollie when we show him.”