Family Keeps Skunk as a Pet

When people think of skunks, they immediately think of the animal known for its odorous secretions, or the foul smelling Pepe Le Pew cartoon skunk. But no one thinks of skunks as a great pet, unless you are the Kim family in Bergen County, New Jersey. The Kim family has adopted a pet skunk, housebroken it, and even walks it around town on a leash. They named their unusual pet companion as Seven. 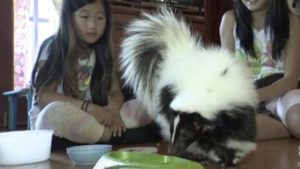 Seven was adopted when Gloria Kim saw a skunk in an exotic pet store. She found out from the pet store owner that you needed to get a permit from the Fish, Game, and Wildlife department to keep them as pets, but that it was indeed legal to have them as pets. The permit costs $12 per year. Kim kept her due diligence and made all the necessary steps to get her family a pet skunk, and after getting a permit, she acquired a baby skunk for her two daughters at home. 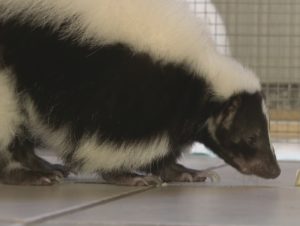 And it’s not so bad as most people think. Seven had undergone surgery that removed it’s scent glands, so Seven is unable to secrete the foul odor anymore. The 5-pound skunk lives inside the house with Gloria and her kids. Seven is also housebroken and is trained to use a litter box. The skunk does not even shed in the house. And although the Kim family still gets stares from their neighbor s whenever they walk their skunk, they already consider little Seven an important part of their family.