English Pub Cancels Snail Race Because the Cold Slows Them Down

Earlier this week, a pub in England cancelled its inaugural snail race that was supposed to take place last Saturday. The pub said that the reason it was canceled was because the freezing temperatures that could slow down the competitors and make it harder to watch the race. Snails are already known for being slow moving creatures, and the cold might slow them down even more. A snail already travels at an extremely slow speed of just 1.3 centimeters per second. 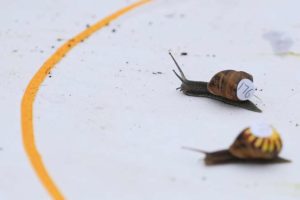 “The cold snap has led to a medical problem with our racing snails – it’s called hibernation,” said the Dartmoor Union Inn in its official social media page. The pub is located in southwest England. The temperatures in England, as well as in many countries in Europe are colder that it was last year. British weather forecasts have warmed people about freezing wind and snow that could slow down or even stop public transportation. This will have an impact on the commuters that are coming over for the coming week. 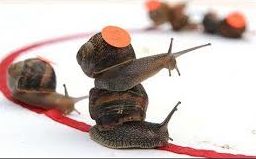 England’s very own public health authority has said that the prolonged cold weather would be dangerous for elderly people and young children if they did not have proper heating. It is also apparently very disrupting in terms of snail racing. The Dartmoor Union Inn said it planned to reschedule race for a warmer time in the near future. The race came in with the billing as “The 1st International Snail Grand National”. All profits of the race will go to helping local air ambulance services.