Bus drivers are often not recognized for the work that they do. They have to drive and navigate a large bus while keeping 50 or more children in check. But every once in a while, they do something heroic and get the recognition that they deserve. This happened earlier this week when the quick thinking of a bus driver named Teresa Stroble saved the lives of almost 60 children from a bus on fire. 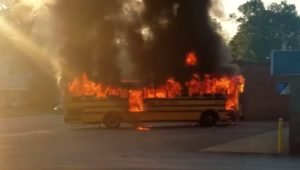 It all started when a couple of kids from the back of the bus informed Stroble that there was smoke coming from inside the bus. Stroble then calmly pulled over the bus and evacuated each one of the children from the vehicle and led them to safety. Just seconds after the bus was evacuated, it burst into flames. Thanks to the quick thinking and decisive action of Stroble, no one was hurt from the incident. The fire eventually died down and no other people were in danger, but cause of the fire is still unknown. 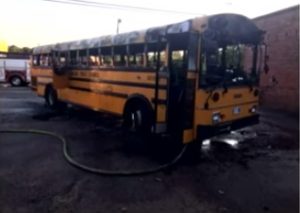 The video of the burning bus has since gone viral on the internet. Some bystanders have said that the flame was so intense, that they could feel the heat all the way from across the street. Meanwhile, many people have been quick to praise the actions of Stroble. The South South Carolina school district’s superintendent Scott Turner took to twitter to thank and praise Stroble. In his post he says: “Hero! Ms. Teresa Stroble evacuated 56 students in under a minute. God bless her. So grateful for her quick action.”