An announcement on the model Mama Cax's Instagram page stated: "To say Cox was a fighter would be an understatement. As a cancer survivor, she had grown accustomed to taking on life's several challenges head-on and successfully. It is with that same grit (fervor) that she fought her last days on earth."

Mama Cax, born Cacsmy Brutus, modeled for only a handful of years, but left an undeniable impact on the fashion and beauty industry. Her signature prosthetic leg was a game-changer for many other models with disabilities, and with it Cax opened many discussions around ableism in the fashion industry. 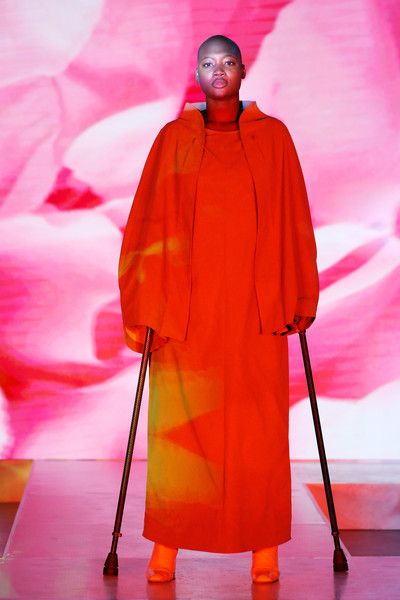 Cax was first diagnosed with bone and lung cancer at the age of 14. Following treatment, her body rejected a hip replacement surgery, which led to the amputation on her right leg.

Any fun getaways this winter? Where are y’all heading?- I love a suitcase that screams “she has her life together” even though I always complete my packing right before heading to the airport. I tend to overpack because I like to have options but the International carryon is perfect for a 2-3 day holiday. I love that @tumitravel offers a solid shell, ample packing space - and if you’re the creative type you can also have fun decorating it with stickers 😉 #mamacax #perfectingthejourney __________________________________________________

After years of battling with self-esteem and self-image, Cax turned to modeling. “Here I was at 16 years old, covered in scars and missing a limb. I did not feel pretty," she told HuffPo back in 2015. "In the last couple of years, I’ve been able to step away from my judgmental self and observe how my loved ones see me. For them, my scars represented the battles I won and my prosthetic has made me this super cool cyborg chick."

As a model, she voiced her opinions on what inclusivity and diversity should really look like because women with physical deformities are generally marginalized and overlooked in society. "Disability crosses so many identities, and oftentimes those aren't represented," she told Glamour.