Deadpool and Wolverine Trolling Each Other Is The Funniest Thing Ever

Hugh Jackman, AKA Wolverine, is currently busy promoting his new movie, Logan, which has been hugely successful and became the highest ever R-rated March opening, displacing Zack Snyder’s 300. And, as is somewhat customary with celebrities going on tour to promote movies, Hugh Jackman tweeted a picture of himself with fans in Beijing.

The post immediately caught the eye of a certain someone who just can’t resist the chance to run his mouth off.

Pretty sure those are protesters. https://t.co/URNGDCg0cO

Hugh Jackman certainly was not impressed.

The two appeared together as their respective superhero characters in 2009’s X-Men Origins: Wolverine, and apparently, have been going at each other for a while now.

For example, Jackman once wore a mask and posed as Reynolds, urging viewers to urinate on the section of the sidewalk where Reynolds’ star on the Hollywood Walk of Fame is.

@VanCityReynolds asked me to post this 100% real video by him on being honored with a star on Hollywood's Walk of Fame today. pic.twitter.com/LE4dQXpTuV

Of course, it’s not like Hugh Jackman started it, as Reynolds was the first to actually do it in widely successful R-rated superhero movie, Deadpool.

There’s also the time Reynolds took over Jackman’s Instagram, impersonating the actor’s Australian accent all the while wearing the scarred face that his superhero character, Deadpool, wears.

Reynolds says in the video, “G’day mate. Hugh Jackman here. Just reminding you to get your votes in for People’s Sexiest Man Alive.”

Presenting … ME by HIM. @vancityreynolds #SMA

Reynolds seems to have done the bulk of the trolling, as he even once hijacked an interview with Jackman.

Not that most people would really get mad, though, as he’s been mighty hilarious through it all. 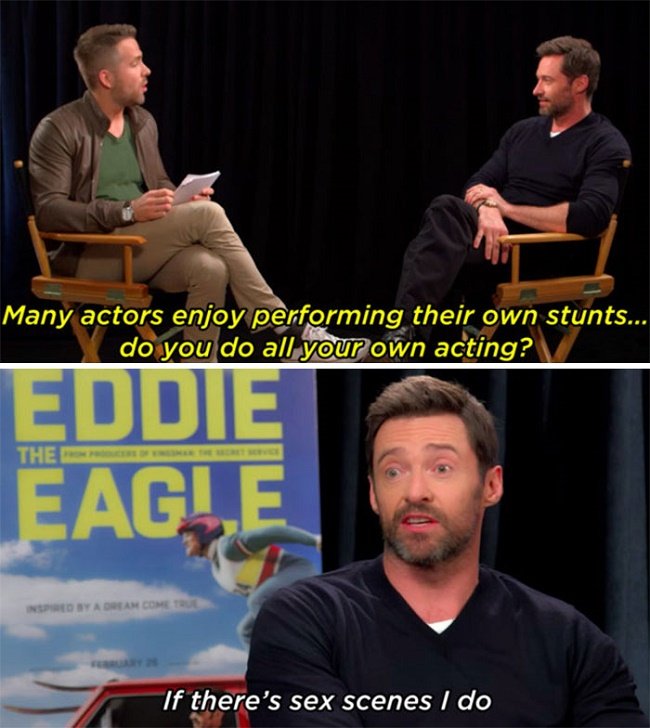 It’s all harmless fun too, as the two seem like they’re close pals through and through.

Hey @VancityReynolds – got you something for your birthday I know you're really going to like. Cue the music! #iceicebaby pic.twitter.com/e08leYiBnl

We’re not exactly sure who’d win a fight between Deadpool and Wolverine, but we’re pretty sure we want these two to keep on trolling each other in the years to come!