In Nevada, a dad appeared in the middle of a proposal on his daughter so that he could show her a sign. The message on the sign hilariously said “SAY NO.” which he held up above his head for his daughter to read. But the newly engaged daughter and her fiancÃ© simply laughed it off and the daughter insists that it was just another one of her father’s “dad jokes”. 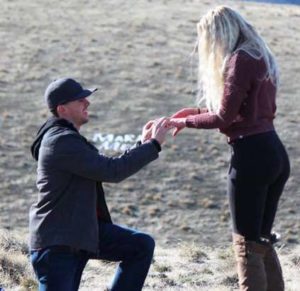 22-year old Allison Barron of Winnemucca, Nevada met her boyfriend Levi Bliss, 23, in college. After the couple graduated, they moved back to her hometown. They have been together for about two years when Levi started to think about getting engaged. It turned out to be a great moment when he went down on one knew to ask for Allison’s hand in marriage. But what they didn’t expect was for Allison’s father, Jake Barron, to be there.

“We immediately both started laughing,” Allison said, “My sister was behind us so we turned to her and was like, ‘Is this real?’ He was like laughing and smiling â€” he was proud of his sign.” Both families were in the bushes nearby, and they all jumped out to congratulate the newly engaged couple. Bliss proposed with the message will you marry me propped up on a hill. 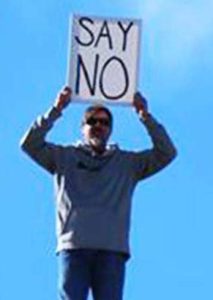 “Her family went out and set up the letters on the side of the hill,” said Bliss, “We were driving, she looked out the window and I was like, ‘Hey, what’s over there?’ She looked over and saw it and started crying.”

“I was completely shocked,” Allison said. “He told me we were going to breakfast so I got ready all cute because we were meeting his family. I couldn’t believe it, I was super excited.” Then her father appeared, “It was very my dad, in like a great way â€” he’s awesome,” she said. “Always with the dad jokes and he finds them hilarious. We love it.”