Engagement photos are usually pictures taken at some exotic location with a great background and some breath taking sights. A couple in Florida recently held their engagement photo in a location that they both loved and meant a lot to them; a Target store. It was a place that had significance to them and their relationship. 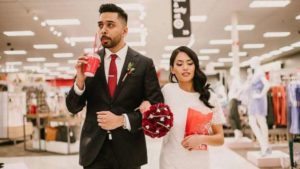 When Isabella Sablan and Michael Delvalle of Miami became engaged, they knew that the store would somehow involve the Target store at some point. The couple said that going to the store had been sort of a tradition to them. Some of their most treasured and joyful memories have occurred in the store in some fashion.

“We’ve actually kind of enjoyed Target since we started dating,” Delvalle told InsideEdition.com.Â  “It was convenient. It was close by. At some point it started becoming a fun hobby. We just found joy in doing it together.” 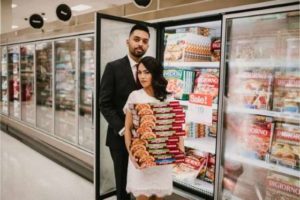 The two have been dating since 2010, and they wanted to have a unique photo shoot for their engagement. It started out as a joke, but the couple liked the idea so much that they went through with the location. And so the couple dressed in their wedding attire and spent a couple of hours in the store for their unique photo shoot.

“We both kind of liked the idea,” Delvalle said. “There was some onlookers wondering what was going on.” The two later got married, but not in a store. They tied the knot at the Miami Beach Botanical Gardens.