A man from Utah has been making elaborate Halloween displays for the past five years. Each year, he keeps trying to top what he did the previous Halloweens. And the displays just keep getting bigger and bigger. This year, Ammon Smith has decided to decorate his front lawn with a scene from the classic film, King Kong. Smith placed a 40-foot gorilla on his Salt Lake City property. 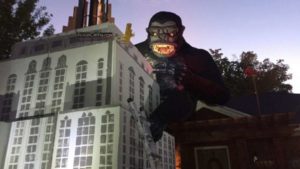 “We love Halloween. We also really enjoy doing crafty things,” said Smith, “Every year Halloween gives us an excuse to build something gigantic and have fun with it.” Smith and his wife Tera are known in their neighborhood for their epic Halloween lawn displays. Smith does a lot of woodwork, so he has the skills and the means to create among the most amazing Halloween lawn displays. In the past years the Smiths have created a pirate ship and a skeleton train. 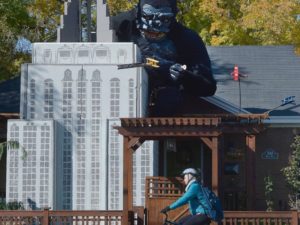 “We found over the years that it’s very community-building,” Smith said. This year, Smith said it took him and his wife 80 hours to complete the King Kong scene. The scene is of the famous giant gorilla climbing the Empire State Building. The building is made from Styrofoam and wood while King Kong himself is made from pool noodles, wood, and various kinds of fabric. Smith says that he plans to use a fog machine to create clouds.Â  According to Smith, the incredible display cost him around $140 to build, but he says that it’s worth it to participate in the Halloween spirit. It also helps that his house is among the most visited by trick-or-treaters.