When they say that your wedding day has to be magical, this couple took things a little too literal. That’s because Allison and Steven Price had a Harry Potter-themed wedding. It seemed appropriate because when Allison first saw Steven, she actually thought that he looked like Ron Weaseley. This was because of his tall stature and ginger red hair. 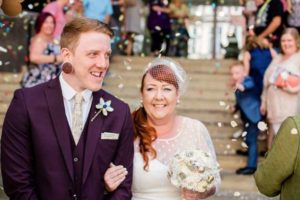 When the two got to know each other better, they eventually found out that they shared a love for Harry Potter and the Wizarding World of JK Rowling. So it seemed only natural that the two would have a Harry Potter theme when they finally tied the knot. In fact, when Steven proposed, he did it with a special ring that looked like a golden snitch.

Their wedding day is in fact, the birthday of Harry Potter from the books. They even designed their invitations in the style of the Marauders Map. On the wedding day itself, they arrived in a blue Ford Anglia, which was the same car used by Harry and Ron in the books. 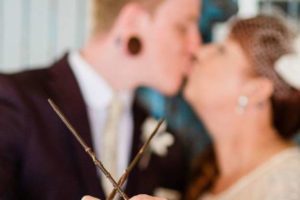 “The bridesmaids were sorted into houses and had dresses in their house colors.” Said Allison, “I took pages from the books to make their flowers and put real flowers in their too, the Gryffindors had red, Slytherin green. The table decorations were all around Harry Potter, they had names like the Leaky Cauldron, the Three Broomsticks, Hogwarts, etcetera.”

“The table savers were Bertie Bott’s Every Flavor Beans and chocolate frogs. The name placement cards had the unforgivable curse printed on them and every seat had a wand. The cake was also themed with all our favorite professors, our patronuses and our house crests – I’m a Hufflepuff and Steven is a Ravenclaw.”