An Alabama student named Walter Carr was on his way to his first job when his car broke down. But he didn’t want to miss his first day or be late so he decided to walk the 20 miles at night. It took him all night but he made it to his job on time. He also had a little help. It was 4 am when he got picked up by the police. When he told them of his story they took him to breakfast and gave him a ride the rest of the way. He was helping a moving company help with the move of the Lamey family. When the Lamey family heard of his deed, they decided to share Carr’s story on Facebook. 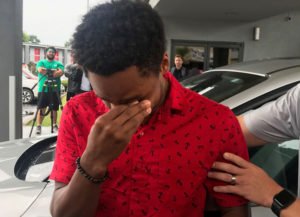 Jenny Hayden Lamey shared: “Around 6:30am the doorbell rang. It was a police officer. He proceeded to tell us that he had picked up “this nice kid” in Pelham early this morning. “The nice kid”, Walter, said that he was supposed to help us with our move today. It was his first day on the job with this moving company (Bellhops) and he was “training” today. The officer proceeded to tell us that the previous evening Walter’s car broke down and he didn’t know how he was going to get to work. So he left Homewood at MIDNIGHT and started WALKING to Pelham on 280 that’s over 20 Miles.

“I just can’t tell you how touched I was by Walter and his journey. He is humble and kind and cheerful and he had big dreams! He is hardworking and tough. I can’t imagine how many times on that lonely walk down 280 in the middle of the night did he want to turn back. How many times did he wonder if this was the best idea?“ 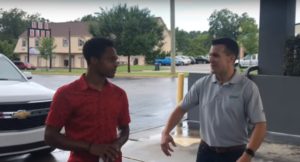 The post quickly went viral and word got out to the CEO of Bellhops Luke Marklin. Marklin personally drove to Alabama from Tennessee to meet Walter for coffee and personally thank him. But when the meeting ended, Marklin surprised Walter by giving him his barely driven 2014 Ford Escape.