In the city of Victoria in British Columbia, Canada, the local government is asking its citizens to pay their parking fines, not to the city government, but rather by making a donation to a local food bank or local charity. This is the city’s way of encouraging people to pay it forward, turning a negative into a positive, and making a mistake into something that can affect another person’s life in a good way. 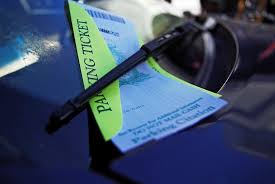 This way of paying for tickets first came into attention when a user from the forum site Reddit posted a photo of his traffic ticket. The photo had the caption “My ‘parking ticket’ from yesterday, courtesy of the city of Victoria.” Most users have praised this way of ticketing, saying it is a great way of paying it forward.

There are also those that think it is too lenient of a punishment for people who have traffic violations. The city also made comments saying it is a great way to encourage drivers to pay their traffic ticket fines, knowing that it is going to a great cause or charity. Most of the charities in the area have to do with local food banks and donations to nearby charities. 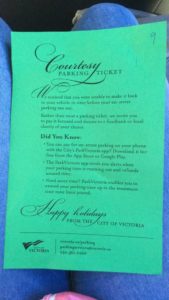 The ticket reads: “We noticed that you were unable to make it back to your vehicle on time before your on-street parking ran out. Rather than issue a parking ticket, we invite you to pay it forward and donate to a food bank or local charity of your choice.”