Captain America celebrated his 40th birthday on Sunday, and his friend and co-star Chris Hemsworth posted a sweet tribute to the actor on his Instagram. However, fans noticed that he's posing with the wrong Chris in the picture. It's on the casting directors for hiring three different actors named Chris to star in the Avengers series, so that's not our fault. Hemsworth wrote, "Happy 40th birthday Chris Evans, you'll always be number 1 in my book 🎉🎉 @chrisevans," but the Chris in quesion? That's none other than Star-Lord, played by Chris Pratt. 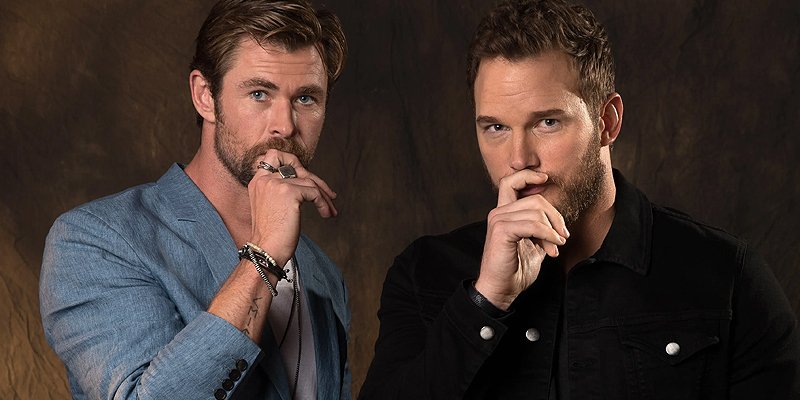 The photo Hemsworth shared is from the set of Thor: Love and Thunder, in which Hemsworth and Pratt are both reprising their superhero roles. The comments section of Hemsworth's photo is full of jokes from fans. "Chris Evans looks different😂," one fan wrote. Another said, "Man. Chris has changed over the years 😂😂😂😂😂." However, other fans brought in the fourth famous Chris, Chris Pine. "Come on…. That's obviously Chris Pine," one fan said as another added, "thats not chris evans ☝🏽☝🏽 its chris pine 🙄🙄."

Chris Pratt has even been confused for Chris Evans by his own father-in-law, Arnold Schwarzenegger. They were doing a video chat for Greater Good, hosted by Pratt. "Hello Chris Evans," Schwarzenneger said when he came on screen. "Not Chris Evans, sorry. I've screwed up this whole thing right from the beginning. Chris Pratt." See, we're not the only ones who can't keep all these famous Chrises straight. "Sorry about that. I should know your name, that's for sure - you're my favorite son-in-law," Schwarzenegger said, to which Pratt replied, "I'm your only son-in-law! I better be your favorite."