In California, a team of chefs broke the record for the world’s longest pizza. The entire pie was measured to be over 6,300 feet and was made by a team of cooks and chefs at the Auto Club Speedway in Fontana, California. The original plan was to make a pizza that was 7,000 feet, but once the record was safely broken, the chefs stopped making the dough and started on the toppings. The pie broke the previous record made in Naples Italy last year (6,082 feet). 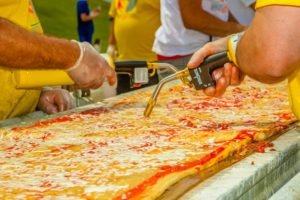 The idea for this record breaking pie was started by a few chefs who heard about the record held by Italy. They wanted to see if they could duplicate or even surpass the world breaking feat. The entire team was led by Fash Asvadi, the founder of PizzaOvens.com. He gained support from a few sponsors to push through with the event. The pizza was assembled on a race track and the cooking process had to be done quickly. The team had a special oven that cooked the pizza at a blinding 17 feet per minute, cooking the pie at 700-1000 degrees Fahrenheit. 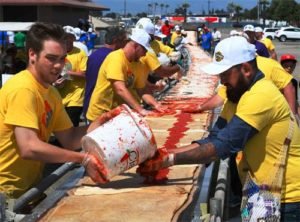 According to reports, there were an estimated 5,000 pounds of sauce and 3,000 pounds of cheese used to top the world breaking pizza. The entire pizza weighed at an estimated 1.7 tons. Representatives from the Guinness World Records were on hand to certify that the record had indeed been broken. The organization tweeted the results on their official twitter account. After all the workers and staff had taken a bit of the pizza for themselves, the rest of the pizza was donated to homeless shelters all over the city.