In the Southern United States, international brewery Anheuser-Busch has announced that they will stop with their beer production so they can instead send more than 500,000 cans of emergency drinking water to Baton Rouge. The emergency water is for the people and families that may not have safe and drinkable water in the wake of Hurricane Harvey. The water will be sent to the Red Cross shelters and distributed by volunteers.

“Throughout the year, we periodically pause beer production at our Cartersville, Georgia brewery to produce emergency canned drinking water so we are ready to help out communities across the country in times of crisis. Putting our production and logistics strengths to work by providing safe, clean drinking water is the best way we can help in these situations,” said Sarah Schilling, a brew master for Anheuser-Busch.

Anheuser-Busch is a brewery based in Cartersville, Georgia. Aside from the cans of water, they will also be sending water using the trucks that they usually use to transport daily beer shipments. The cans of water was previously marked for beer production to Texas and Louisiana, but will instead be rerouted to the areas affected by the hurricane. The company announced that they would not have been able to transport vast amounts of water if not for the help of local independent suppliers and its partnership with the American Red Cross. 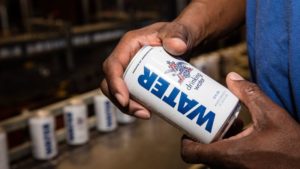 “We’ve also set up a microsite in partnership with Red Cross where employees can make a donation to support victims of the storms,” said MillerCoors spokesman Marty Maloney. “MillerCoors will match all donations made through the microsite for a minimum of $25,000.”