A teacher in Brazil was given a big surprise by his students earlier this week. Bruno Rafael Paiva had not received salary in two months and he was living and sleeping at the school. He had been covering maternity leave for another teacher, and because of local bureaucracy, his name had not yet been included in the payroll. 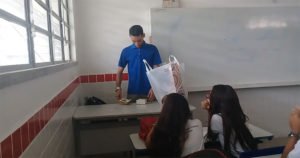 “I’m covering the license of another friend, and the license has a huge bureaucracy of receiving a license, attaching to the system, sending documents of the new teacher, receiving documents, then creating and sending the teacher contract, signing a contract, attaching to the system, and to put the name of the teacher on the payroll of the month. This enormous and lamentable bureaucracy is something that is in every system of our country.”

When his students found out, they all got together and pooled $400 of their own money to help out Paiva. They waited for the teacher to come in and placed messages on their desks for him to read out loud. At the end of the messages, he was led to his desk, where the box of gift money was waiting for him. “This cannot be. How can you do this?” Paiva said. When the class saw that he was in tears, they all ran up to him and gave him a group hug. 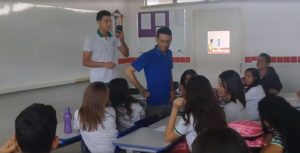 “I have many rooms that I have loved in my heart to be a teacher, but no room has ever shown such love, help and affection for my teacher’s work as Building #1 did today,” Paiva wrote [translated] on social media. “They are students like me, who still make me believe in the education of the country, believe in the love of others, in the compassion of putting oneself in the place of others, and believe mainly in the respect and love of the student towards the #Professor of his school.”