Earlier this week, a police department from Texas got a laugh when they received a letter from an elementary student thanking them for pulling over his mother. The Fulshear Police Department received letters from the students at the Huggins Elementary School for National Police Week. Most of the letters they receive convey thanks and gratitude for protecting the community. One of the more entertaining letters they received was from a young boy who thanked them for stopping his mother during traffic. 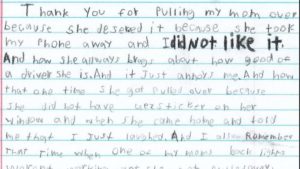 “Dear Fulshear Police Officer,” the letter read. “Thank you for pulling my mom over because she deserved it because she took my phone away and I did not like it. And how she always brags about how good of a driver she is. And it just annoys me. And how that one time she got pulled over because she did not have an ezsticker on her window and when she came home and told me that I just laughed. And I also remember that time when one of my mom’s back lights weren’t working and she got pulled over.” 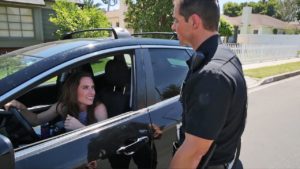 “We all got a good laugh out of it so we decided to post it on Facebook,” said one of the officers. The letter has since been posted in the police department’s official twitter page, where it quickly went viral. People are just loving the brutal honestly and adorable sentiments of the little boy. The police department also tweeted a caption to go along with a picture of the letter. The caption said: “Love the (sometimes brutal) honesty of Elementary students.”